Six Alumni to be Inducted into Athletics Hall of Fame 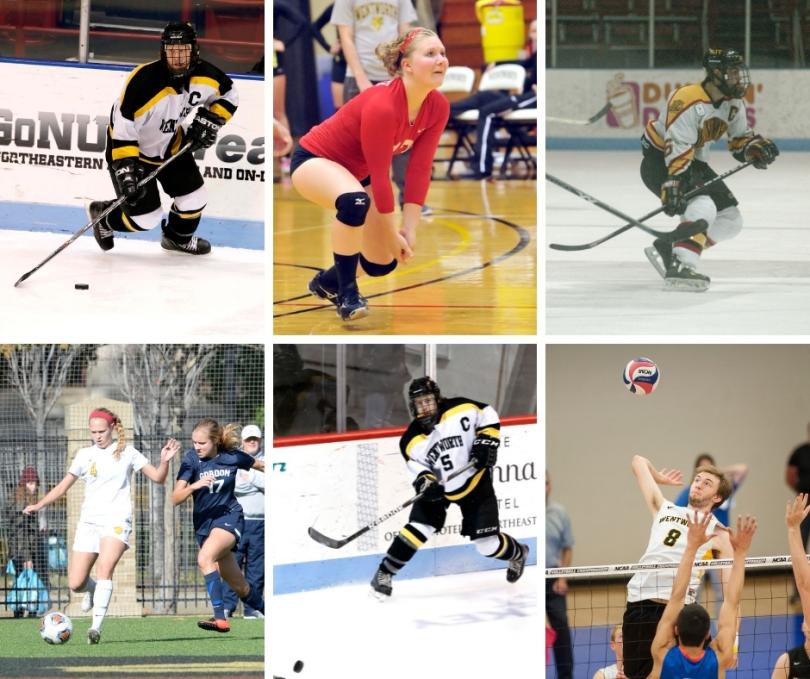 From the ice to the volleyball court, soccer field, and softball diamond, Wentworth’s Class of 2022 Athletics Hall of Fame inductees are a fine example of versatility.

The former student-athletes will be honored during a special luncheon held on Saturday, May 14 as part of the inaugural Alumni Day event. All alumni are invited to take part and may register prior to May 9.

Alex Marinkovich was a four-year letterwinner on the ice hockey team from 2000-2004. He played in 112 career games, scoring 70 goals and assisting on 70 others for 140 career points, which ranks him fifth on the program’s all-time scoring list.

Marinkovich helped the Leopards reach the ECAC Northeast championship game in each of his four years, with the team winning the conference championship and participating in the NCAA Tournament in 2002, 2003, and 2004. During the 2003 season he scored 53 points, which is the second most in a single season in program history, and he was named to the ECAC Northeast All-Conference Team that season.

The Wentworth ice hockey program’s second-ever All-American, Shaun Jameson is Wentworth’s all-time points leader for defensemen with 95. That total also ranks him 13th on the program’s all-time scoring list and his 71 career assists rank him sixth in program history.

A four-time All-ECAC Northeast selection, Jameson earned ECAC Northeast Player of the Year honors in 2013 after helping Wentworth to its second straight (and sixth overall) ECAC Northeast Championship. That season he ranked among the Top 10 in defenseman scoring in Division III, averaging 0.96 points per game and he was named a finalist for the Sid Watson Award, which is presented annually to the top Division III player in the country.

During his freshman season he scored 48 points—the fifth-most in program history—and he helped the Leopards reach the ECAC Northeast championship game in 2010, 2011, and 2012, and captured the ECAC Northeast Championship in his senior season of 2012. That season saw the program win Wentworth’s first-ever NCAA Tournament game.

During his junior and senior seasons, he was named a semifinalist for the Joe Concannon Award, which is given to the top American-born ice hockey player in New England at the Division II/III level, and, as a senior, he was a CoSIDA Academic All-District selection.

A two-sport standout as the true definition of a student-athlete, Sam Curran was a member of both the volleyball and softball teams at Wentworth.

As a member of the volleyball team, she set a program record for digs during her senior season with 427 and is the program’s all-time leader in digs (1,414) and digs per set (3.81). During her junior season she was named to the CoSIDA Academic All-District Team and followed that up with Academic All-America honors as a senior. In addition to leading the program in digs and digs per set, Curran ranks fourth in sets played (371), sixth in service aces (371), and seventh in matches played (106).

On the diamond she grabbed national attention as a senior when she was named the 2015 Division III Academic All-America of the Year after being named a First Team Academic All-America. This came on the heels of being named a Second Team Academic All-America as a junior. During her senior season she was a First Team All-Commonwealth Coast selection and the CCC’s Senior Scholar-Athlete of the Year. That season she batted .424 with an on-base percentage of .479 and a slugging percentage of .635 and was a perfect 10-for-10 in stolen bases. For her career she was 31-for-31 on stolen bases and is also atop the program’s all-time list with 278 assists while ranking in the top five in runs scored (98), doubles (32), hits (126), total bases (192), triples (eight), walks (49), batting average (.358), on-base percentage (.442), games played (128), and stolen bases (31).

At the conclusion of her senior season, she was named the CCC’s recipient of the NCAA’s Woman of the Year Award.

A mainstay on defense for four seasons, Mary Pastorelli was a three-time All-Commonwealth Coast Conference selection who earned CCC Defensive Player of the Year and All-New England honors during her junior and senior seasons. During her senior season she helped anchor a defense that allowed just 14 goals in 23 games and recorded a program-record 14 shutouts. That season the women’s soccer team because the first women’s team in Wentworth history to win the CCC and earn a berth in the NCAA Tournament, where they won their opening-round contest.

While she was known for her defense, Pastorelli also scored seven goals and assisted on five others for 19 points during her career. She ranks fifth all-time in games started with 74 and is tied for sixth in games played with 82.

The first-ever All-American selection for the Wentworth volleyball program, Alex Potts was a four-year standout for the Leopards who played in 119 matches (382 sets) over the course of his career. Potts earned All-Great Northeast Athletic Conference honors on three occasions (2015, 2016 first team; 2017, second team) and helped Wentworth to an ECAC Championship (2014), its first two GNAC Championships (2016, 2017), and two appearances in the NCAA Tournament (2016, 2017), with the 2017 squad advancing to the national semifinals.

Started in 2001 Wentworth’s Athletics Hall of Fame “honors individuals whose contributions have made an impact on the Wentworth Athletic Program, either as a student-athlete, coach, or contributor.”

This year’s ceremony will be a part of a luncheon event that will also find updates from President Mark Thompson and Vice President for Institutional Advancement and External Relations Crate Herbert.