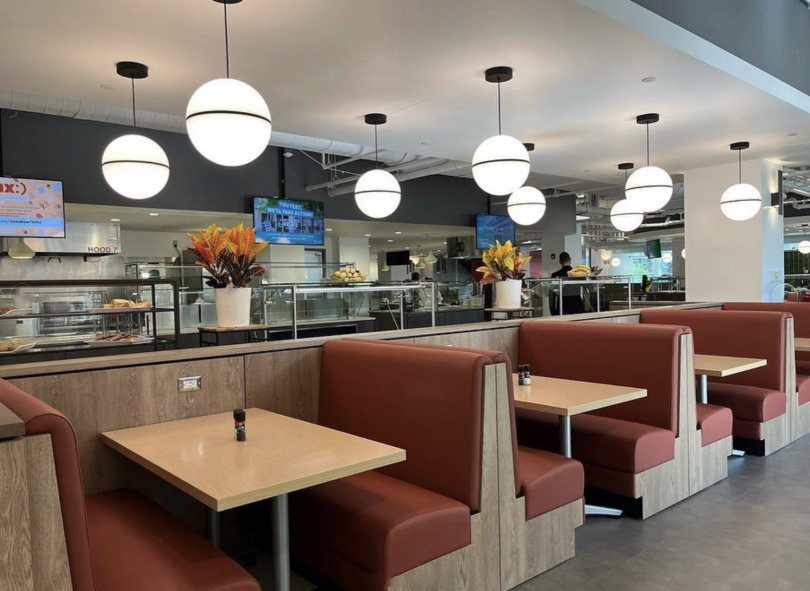 The Wentworth Institute of Technology community spoke, and the university has delivered: A completely renovated Beatty Hall Dining Commons opened this week and it features items that diners have long asked for.

At the top of the list is an all-you-care-to-eat (AYCTE) pay structure in which diners can pick and choose what they like, as much as they like, for a flat rate. The model has long been in the works and oft asked about.

Students Jason Levreault ’24 and Caleb Lawson ’25 were among those on this week who sang the praises of “unlimited food,” while Matt ’25 noted he was most excited about the “new system with the food.”

“I like being able to grab whatever I like instead of having to wait and pay separately,” he continued. “I think it’s a lot easier and more enjoyable.”

Breakfast is now available all day, as well as soups, and a dedicated dessert section that changes based on time of day. Operating hours have also been increased with the Dining Commons now closing late Monday through Friday in order to meet more student schedules.

“We needed improved plant-based meal offerings, diverse cuisines, and an enhanced food allergen program that could provide offerings that were truly gluten-free and entrees that are free from the most common food allergens,” said Tom Kane, Director of Purchasing & Auxiliary Services.

The dining hall itself underwent a major overhaul with new décor, a different flow for traffic, and brand new seating that includes booths and charging ports.

“The new layout is a lot cleaner and a lot more open,” said Amanda ’25. “It makes it feel so much bigger.”

For those who don’t wish to pay the AYCTE fee, the new Ben Garfink Lounge is a space adjacent to the main dining space where guests can bring in their own food or simply hang out.

The renovations come in part from the recommendations of Dining Committee members, which includes several Wentworth students, and colleagues within the Colleges of the Fenway.

“We recognized that the school’s campus dining model and facilities needed to be updated and brought into the 21st century,” said Kane. “These changes help us be in line with a modern student lifestyle and expectations.”