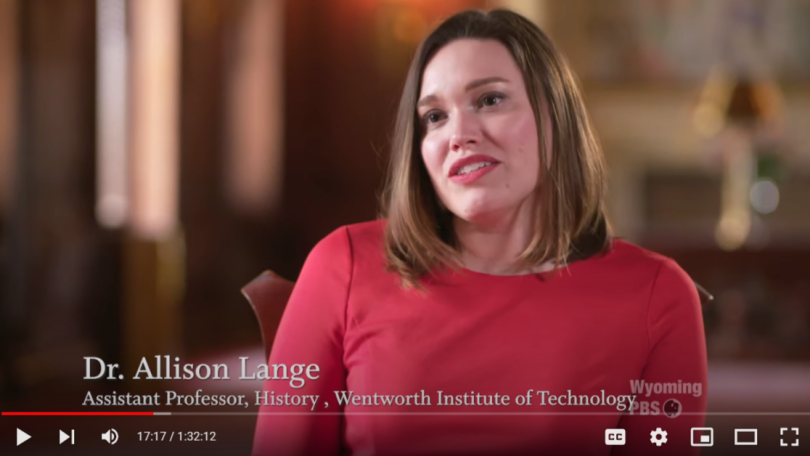 Allison Lange, a Wentworth Institute of Technology assistant professor and leading expert on the suffrage movement and 19th Amendment to the U.S. Constitution, appears in a new PBS film chronicling Wyoming’s place as the first state to provide women access to the vote.

Passed by Congress on June 4, 1919 and ratified on Aug. 18, 1920, the 19th Amendment made voting restrictions based on gender illegal, which helped secure the vote for some (but not all) women. Lange, of Wentworth’s Department of Humanities and Social Sciences, has been working on a book on the Amendment that is scheduled for release by University of Chicago Press in time for the 2020 anniversary of the Amendment’s ratification.

Lange and Wentworth’s Women’s History Month Committee were recently awarded an EPIC mini-grant from Wentworth for a project titled, “VOTE: 100 years of Votes for Women.” Last fall, Lange curated with the help of Wentworth students an exhibition titled, “Can She Do It? Massachusetts Debates a Woman’s Right to Vote” at the Massachusetts Historical Society. Videos created by Wentworth students were on display there as part of that project. Lange was also a major contributor to an August 2018 TIME magazine article on the suffrage movement, and In May 2019 House Speaker Nancy Pelosi, D-Calif. 12th District, invited her to a reception at the Capitol to mark the 100th anniversary of the House’s passing the 19th Amendment.

Lange has been awarded funding from the National Endowment for the Humanities for her work.