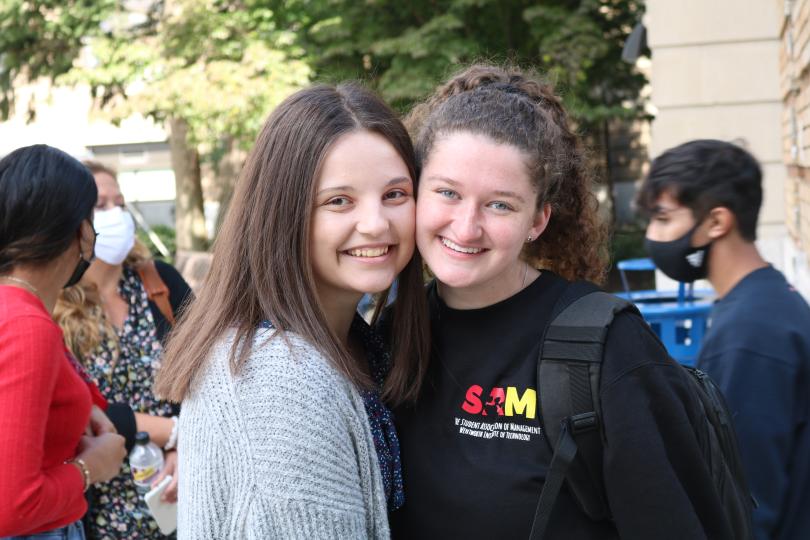 Sindi Bendo, Management ’22, and Dani Topale, Computer Information Systems ’24, made history this semester when they respectively took on the roles of president and vice president for Wentworth Student Government.

While women at Wentworth have held the two WSG positions in the past, never have women served in the roles at the same time, and only two women have previously held the position of president.

Since the beginning of their tenure, the two have led their executive board through a series of new initiatives, quickly building a positive reputation for their pragmatic approach. They also took over Wentworth’s Instagram account this fall, providing an inside look at what they’ve been up to.

We spoke with President Bendo and Vice-President Topale near the end of their first semester heading up WSG, looking back on what they have already accomplished, where they hope to go, and what has surprised them thus far.

Greg Abazorius: What interests you about student government?

Sindi Bendo: I was interested in taking on a role in Student Government to amplify the student voices and to make sure that every student has the resources they need to succeed. As I made the transition from high school to college, participating in clubs and student council has helped me understand how to narrow disparities in our surroundings and has given me the confidence to be an advocate not only for myself but for everyone.

Dani Topale: I want to be a representative for all students and other female-identifying students here at Wentworth. I see how amazing Wentworth is and want to be a part of making it even better. What interested me specifically about student government is the change that WSG can make. The students do have a say. WSG is a great channel for the student's voice to be heard and I wanted to partake in enhancing the student voice.

Greg: Had either of you been involved in this type of work before (high school or otherwise)?

Sindi: I was in student council in high school and a member of the class committee, which helped plan activities and serve as the voice of the graduating class. In addition, I am a former intern of the United Nation Association of Greater Boston whose mission is to educate, inspire, and mobilize members of the community to engage with critical global issues central to the work and mission of the United Nations. I continue to volunteer at UNAGB as this work gives me the opportunity to help future generations use their voice and resources to improve the betterment of society.

Dani: I had not been involved in student government before. I wanted to be a part of a student government that inflicted real change and had a significant impact on the community, and I never found that until I attended Wentworth and joined WSG.

Greg: What are you most proud of accomplishing with WSG thus far?

Dani: So many things! From the wellness day in the Spring of 2021 to making activity bags for those in quarantine housing to remote learning, every project big or small I am proud of because it is one thing closer to helping the students here at Wentworth.

Sindi: WSG has accomplished many projects in the four years that I’ve been a part of it, especially when it comes to dining and this year creating a Women’s Power Hour in the Schumann Fitness Center in order to make the gym a more inclusive space for students on campus.

Greg: What has been the most surprising part of what you're doing?

Sindi: How fast we can create a project and execute it based on the student’s needs. For example, this semester WSG has worked with the Sodexo team (the new dining vendor on campus), addressing all student concerns. We have been able to implement change daily in response to student feedback and hope to continue that in 2022. WSG looks to have more students join in order to continue making progressive changes at Wentworth.

Dani: That more students don't take advantage of WSG. There is so much that students can learn from attending the weekly meetings, participating in surveys, or even being a part of the executive board. Yes, WSG does need to work on communication and that is something I hope to work on in the spring of 2022, but there are students who know we exist and choose not to participate. That is their choice, but you learn so much about the school and what you can get out of it if you attend our weekly meetings or at least check out our social media or team's workspace.

Greg: How has it felt to be the first women to take on the roles of president and vice president at the same time?

Sindi: Being the first female president of WSG feels very inspiring and I hope this empowers other female students on campus to pursue leadership roles. Looking back at my first year, I wouldn’t have seen myself in this position, but I am so grateful to have joined WSG and made an impact on our community.

Dani: It feels pretty spectacular. I am so thankful to have this opportunity to help shape the student's experience. Being a woman in STEM it feels so special knowing that the Wentworth community supports Sindi and me.

Greg: What are you hoping to accomplish going forward?

Dani: WSG is constantly working on multiple projects at once. Long-term and short-term projects are always in the works. I hope to change WSG so we are better at communicating with the student body, letting students know we are a resource that they can utilize to become a bigger student voice than we already are. We are also looking to continue working with Sodexo for dining and working with the Center for Wellness to see how they can better attend to the student's needs.

Sindi: During my term, I hope to create a more inclusive, safe, and collaborative environment for all Leopards whether on campus or commuters. From communication to campus life, many aspects need student feedback, so getting new members to join is vital.