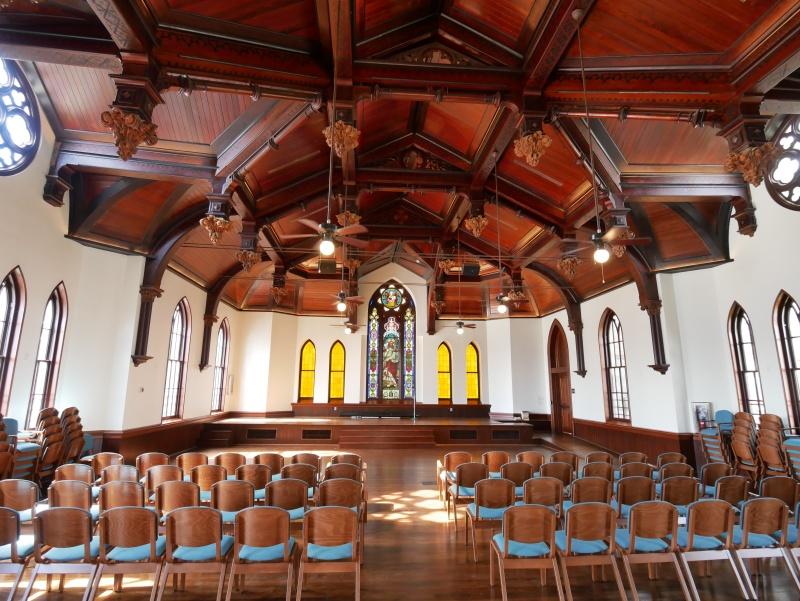 Interior of the Eaton Memorial Chapel in Galveston, Texas

Wentworth Institute of Technology’s Sedef Doganer, dean of the School of Architecture and Design, is among a team of researchers based out of The University of Texas at San Antonio (UTSA) looking to prevent hurricane damage to historic buildings along the Gulf Coast.

As part of the UTSA Center for Cultural Sustainability (CCS), a recent study involved assessing nine buildings of worship that are either eligible for or already on the National Register of Historic Places. Each building was assigned a number by the researchers that indicates how likely the structure is to collapse or maintain integrity in the event of catastrophic events such as hurricanes, a common phenomenon along the Gulf Coast of Texas.

The team surveyed numerous faith-based groups to learn of any existing standards and guides that might be in place, but 80% responded that there is a need for one. The researchers also utilized a computer simulation program to test against a Category 5 hurricane and were pleased to find that the structures themselves held up. Soils were also studied and found—in most cases—to not swell under pressure

Based on their findings, the group recommended several steps to building supervisors including installing a fire suppression system and an emergency generator, adding special polycarbonate panels to the windows to protect against heavy wind, and to craft a disaster response and recovery plan. These recommendations resulted in a recently released Resilience Roadmap.

The publication serves as a step-by-step guide to help preserve the structural integrity of these properties against hazardous weather events. Dean Doganer believes the toolkit has the potential to become “a common language between faith-based organizations and emergency planners."

Funding for research was provided by emergency supplemental funding from the Historic Preservation Fund as administered by the National Park Service, U.S. Department of Interior, and the Texas Historical Commission.