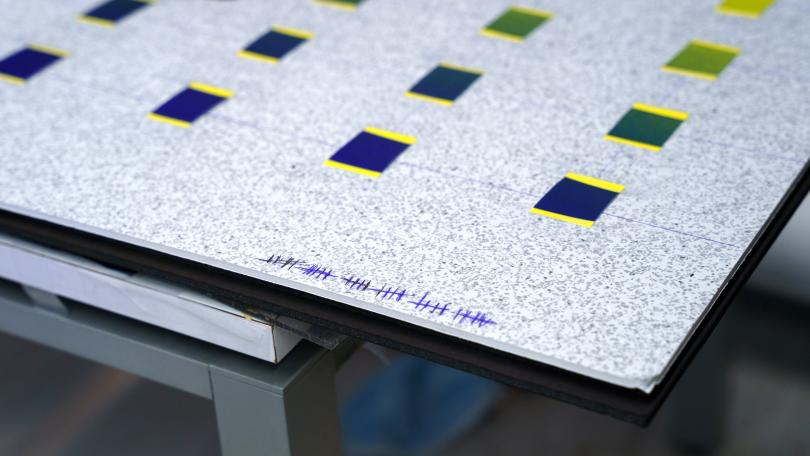 In Major League Baseball, the magic number to make the playoffs is the number of wins needed by a team combined with losses required by its closest competitor. Now a team of Wentworth professors and students is wondering if the magic number for the global pandemic is 55—as in 55% indoor relative humidity.

Above this value, moisture in the air is sufficient to neutralize the electric charges of particles {1}, such as dust and viruses, thereby minimizing the possibility of electrostatic attraction or repulsion between other objects and surfaces.

Other researchers {2} have already suggested a possible correlation between the seasonality of infectious disease and indoor relative humidity. Based on these established observations, the Wentworth group is simply wondering if raising indoor relative humidity above 55% could possibly curb transmission by reducing the possibility of electrostatic interactions.

Prior to joining Wentworth in 2015 to fulfill his lifelong dream of teaching students, Associate Professor John Voccio worked for more than 25 years as an engineer, consultant, and research scientist in the field of superconductivity, electromagnetism, and product design, and he is currently leading an NIH-funded, R15 undergraduate research program at Wentworth aimed at qualifying new superconducting materials for use in high-field (> 30 tesla) magnets.

Since the beginning of the global pandemic, Voccio has also been leading an internally funded research project studying the behavior of electrically charged fine aerosols in the presence of small ambient electric and magnetic fields in indoor, low relative humidity environments. Voccio notes that the flight paths of small particles, such as fine aerosols and the coronavirus itself, may be altered by these fields possibly causing undesirable dispersion or surface deposition.

As a simple experiment to illustrate the basic concept for this article, they used a mesh nebulizer to flow fine aerosols (1-5 micron particle size) over a stack of neodymium-iron-boron (NdFeB) permanent magnets, such as those used in microphones and speakers. The magnets were placed underneath highly water-sensitive paper allowing them to map the aerosol dispersion patterns as shown in Figure 1. The magnet shapes are clearly visible as compared to the control sample which simply has a plastic block underneath the same paper.

“The main observation here is that the aerosol flight and deposition patterns are being influenced by the projected magnetic field,” Voccio said. “Even though the resulting forces are small, the particles can experience significant accelerations due to their tiny mass, as it is the force-to-mass ratio which counts when it comes to acceleration.”

Regarding indoor relative humidity, Wentworth Professor Mansour Zenouzi, who has considerable expertise in HVAC building systems, notes that indoor relative humidity is lowest in the summer when air conditioners condense water out of the air and in the winter when outdoor air is heated without accompanying humidification. Voccio points out that this seems to be consistent with rises in coronavirus case counts during those same periods—summer and winter.

Bars and restaurants, where coronavirus transmission has been a concern during the pandemic, are known for having low indoor relative humidity. Over a couple of days last summer in Boston, Voccio used a  pocket-sized hygrometer to measure the relative humidity of various restaurants, malls, trains, atriums, elevators, and other spaces in Boston, recording an average value of 49%. While below the magic number of 55%, he says the good news is that these values were not that far away from the 55% target. Voccio notes that he has often used a very small vaporizer to raise the relative humidity of his laboratory from, say, 35% up to 45% over the course of an hour during their experiments, so this is an achievable goal requiring adding relatively small quantities of water to the air.

Zenouzi adds that the ASHRAE (American Society of Heating Refrigeration and Air Conditioning Engineers) standard for indoor air quality (IAQ) suggests maintaining an indoor relative humidity between 30-60%; therefore, the proposed relative humidity range of 55-60% is considered acceptable. Voccio notes that, without the hygrometer, he cannot physically tell the difference between 45% and 55% relative humidity in the lab; however, over 60% relative humidity is noticeable and starts to feel uncomfortable. Zenouzi added that National Institute of Standards and Technology (NIST) researchers have developed a new interactive webpage named Virus Particle Exposure in Residences (ViPER) that helps occupants of small, medium, and large buildings to learn how certain actions such as installing portable air cleaners, better HVAC filters, such as MERV 6 or 13, and increasing outdoor air ventilation may lower the exposure to particles. Unfortunately, the NIST software program does not presently incorporate the effect of relative humidity.

As part of the Wentworth research, which is currently undergoing journal peer review, the team has developed and conducted two innovative experiments to study the dispersion and deposition patterns of both negatively and positively charged water aerosols and found that small ambient electric fields can alter the aerosol flight patterns. Voccio has initiated a collaboration with another university and is open to discussing this research with other interested research groups, including some of the same national laboratories he has worked with on superconductivity research. Since he uses more of general and experimental approach to problem solving, he hopes that more focused and experienced experts in physical chemistry and clean room electrostatics can provide more specific practical guidance and recommendations on the severity of this risk as well as appropriate corrective actions.

Voccio adds that, as with most scientific theories, there is only one way to prove it—run the experiment to see if increasing indoor relative humidity, especially in heavily trafficked, indoor venues, to 55% can curb transmission. It just might be time to dust off those humidifiers and vaporizers and utilize the already existing HVAC controls of many modern buildings and see if the magic number is indeed 55%.