Skip to main content
Follow the University's Response to the COVID-19 Pandemic
Continue to check wit.edu for further updates as they become available.
Back 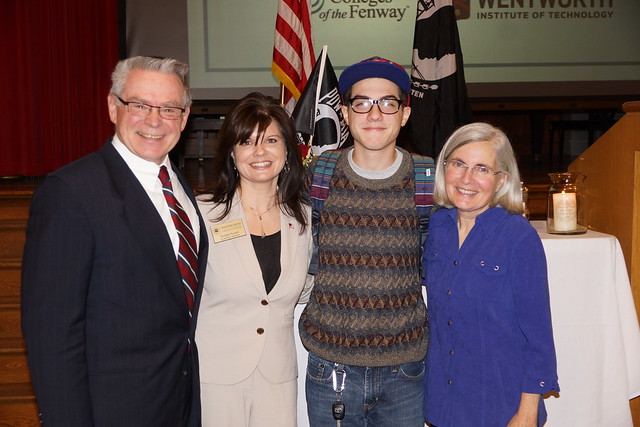 A life of integrity is what Lt. Colonel (Retired) E.S. Toby Quirk urged all students to strive for when he served as the keynote speaker for the annual Veterans Day Luncheon on Nov. 10.

Quirk spoke before members of the Wentworth community, including many veterans, in Watson Auditorium for the event organized by the College of Professional and Continuing Education (CPCE).

A member of the West Point Class of 1970 and a 23-year Army veteran, Quirk served in the Infantry, Special Forces, and various staff positions during his career, including a tour as chief of operations for Task Force—Kuwait. Quirk spoke on the topic of “Leading with Ethics and Integrity,” relating his commitment to inspiring college students to lead a life of integrity.

Quirk’s grandson, Brendan Aureli, is enrolled in Wentworth’s Business Management program as a member of the Class of 2017.

A spirt of gratitude permeated the air as numerous guests, both active and retired, represented various branches of the U.S. Military. Michael Jackson, Mechanical Engineering department chair and former staff sergeant in the U.S. Marine Corps, called the event to order by introducing Army ROTC Cadets Evan Cummins, Trevor Golden, Michael Buzy, Maggie Dodman, and Joseph Bruno-Metzger. The group provided the ceremonial posting of the colors before Cadet Neil Lombardozzi, BELM ’17, led those gathered in the Pledge of Allegiance.

CPCE Dean Deborah Wright officially welcomed guests at the luncheon by those gathered, which included students from five branches of the armed services, various Wentworth alumni, and representatives from the Colleges of the Fenway. She also noted that her school is continuing the tradition set forth by retired Wentworth professor Joe Schellings, a Vietnam War veteran who helped organize the Veteran’s Luncheon in previous years.

For more information on veterans’ services at Wentworth, visit www.wit.edu/veterans.

Please be advised that Wentworth events, schedules and programs are changing in light of the Covid-19 pandemic. See the university's Coronavirus Information Hub for the latest details regarding the Institute’s response to the ongoing crisis.