Off the Green Line: Fenway 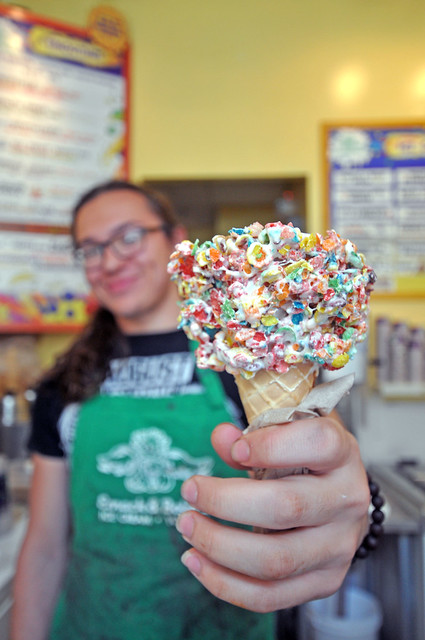 Wentworth’s urban location offers a plethora of fun opportunities for students. The Massachusetts Bay Transportation Authority (MBTA) Green Line, located right in front of campus, gives students access to a wide range of destinations around the city. The “Off the Green Line” series maps out some of the traditional, as well as some of the unconventional, places to see around Boston.

In this edition, we head to Fenway, accessible by the D branch of the Green Line.

This hidden gem was created in 1990 by David Ramler, a successful businessman and property owner in Fenway. He was approached by his residents about converting an old vacant lot into a neighborhood park. Ramler believed a park would be the perfect gesture of appreciation to the neighborhood he loved. Although he passed away in 1991 before the park was completed, his family carried out his ambitions, and in June of 1999 Ramler Park was taken over by the Boston Parks Department for establishment. The park is now a beautiful place in which to sit, enjoy the elegant water fountains, or listen to occasional live performances.

This unusual and daring ice cream hotspot first started in Boston in 1975. Five years later, Emack & Bolio’s invented the flavored cone, and has since expanded their selection of covered cones. Yes, that’s right—covered cones. Imagine a waffle cone thinly dipped in Oreo crumbs, Rice Krispies, Fruit Loops, or even marshmallows topped with your favorite frozen yogurt or ice cream flavor. Does it sound good? Maybe you should visit.

Emack & Bolio’s get their inspiration from their customers, grocery stores, dessert chefs, and even Mother Nature. All of their products are made with nonfat milk and the owners strongly oppose using cow’s milk injected with the genetically induced hormone bST.

On April 16, 2004 the Boston Red Sox debuted the Ted Williams Jimmy Fund statue outside the Gate B entrance to Fenway Park. The 12,000-pound, eight-and-a-half-foot-tall statue created by sculptor Franc Talarico portrays Williams placing his hat upon the head of a young boy afflicted with cancer. The statue was created on behalf of the Dana-Farber Cancer Institute and the Jimmy Fund.

A place to gather with your friends and listen to your all-time favorite rock band, electric dance music, or country artist, the House of Blues was founded by Isaac Tigrett in 1992. The first location was across the river in Cambridge’s Harvard Square. Although Tigrett envisioned his establishment to consist mainly of blues, rhythm, gospel, and jazz, the House of Blues is dedicated to educating and celebrating the history of Southern culture and African American music and art.

If you are a diehard Red Sox fan, or simply enjoy good food with a great atmosphere, you’ve probably been to Cask n’ Flagon. This bigtime sports restaurant started as a small neighborhood bar called Oliver’s 40 years ago, and the old nightclub is still a part of the Cask today. A landmark location for Red Sox fans, locals and tourists, the Cask was rated the “Top baseball bar in America” by ESPN.