NSBE Named Organization of the Year

After months of membership growth, board meetings, community outreach, and marketing efforts, the Wentworth chapter of National Society of Black Engineers (NSBE) was honored as Organization of the Year at the March 23 Annual Student Awards.

For NSBE, the award, presented by the Office of Campus Life, was the crowning achievement of a busy 2015-2016 academic year. The group continues to look ahead, though, embracing two ideas that they hope have a positive impact on generations to come.

The first is the hashtag #BlackAtWIT, a celebration of the Wentworth community and student accomplishments.

Though the month of February has been officially recognized as Black History Month [BHM], or African American History Month, since 1976, it has existed in a variety of forms since 1926. More recently, contemporary historians and activists have started discussions about Black Future Month.

When Clifford Freeman, CIS ’16, started putting together a presentation on BHM, he knew he wanted to also focus on the future.

In transitioning from Black History Month to Black Future Month, Freeman emphasizes the importance of still paying homage to the work and sacrifice of those who came before. BFM could not exist without BHM.

“It [Black Future] would be an impactful month. Maybe we should make it March, because it will inspire people to want to propel themselves further into the future,” he says.

The concept of ownership was important in the formation of #BlackAtWIT, a social media campaign and movement born at Wentworth’s Beloved community retreat during Martin Luther King, Jr. weekend. The photos and videos produced for the campaign are hosted on the Wentworth NSBE Twitter account.

NSBE serves as a network and professional service to increase opportunity for engineers of color. NSBE regional and national conferences often facilitate job offers, but it also provides a space for student pride and empowerment, a critical theme of #BlackAtWIT.

Freeman, who is programs chair at Wentworth NSBE, as well as a member of the regional NSBE executive board, stresses the importance of “holding a notecard in your hand, talking about an accomplishment you had at college, and hashtagging #BlackAtWIT. If we can control what we say about ourselves, we can control a better future in perception,” he says.

Though conscious of the campus climate that #BlackAtWIT is a part of, those partaking in the campaign focused on keeping it positive and taking pride in storytelling.

“I’m hoping it can move along and grow to be something bigger with more structure,” says Naomi Nwaobi, BSA ’16.

William Ma, CIS ’18, currently the only Asian American in NSBE, concurs. “I want everyone on campus to do #BlackAtWIT,” he says. Ma serves as the Chapter Telecommunications Chairperson for WIT NSBE.

Though there is a large overlap between NSBE members and students involved with #BlackAtWIT, the movement does not belong to any specific group.

“It’s not a structured thing and half of us are not black, so I feel like whoever joins, if they understand what the goal is, the messaging won’t change,” says Nwaobi.

The National Society of Black Engineer’s mission “to increase the number of culturally responsible Black engineers who excel academically, succeed professionally and positively impact the community” is something members urge every Wentworth student to embrace, regardless of race. The same goes for #BlackAtWIT.

“It’s an issue of working together rather than who’s the leader,” said Nwaobi. “Being an ally isn’t a title, it should be a verb. It’s something where you’re not seeking recognition.”

“For me,” says Ma, “as an Asian, NSBE is different. Different in the way that there aren’t people like me joining NSBE. I’m kind of spreading a message: you don’t have to be black to join this black organization.”

Freeman agrees. “NSBE is perceived at Wentworth as, ‘That’s the club where the black kids go—it says ‘black’ in it, so it must not be for white people.’ But no, it’s not true. If you believe in the mission then you can a part of NSBE,” he says.

When is #BlackAtWIT a success?

“I think it’s successful when someone leaves after talking with us thinking, ‘OK, that’s interesting, I’m going to think about that, or I’m going to talk to my friends about that,’” says Nwaobi. “I know people are here to study or whatever it is that they’re here to do, but I’m hoping that all this talking that we’re doing is actually helping other people feel like they can talk about this stuff more.” 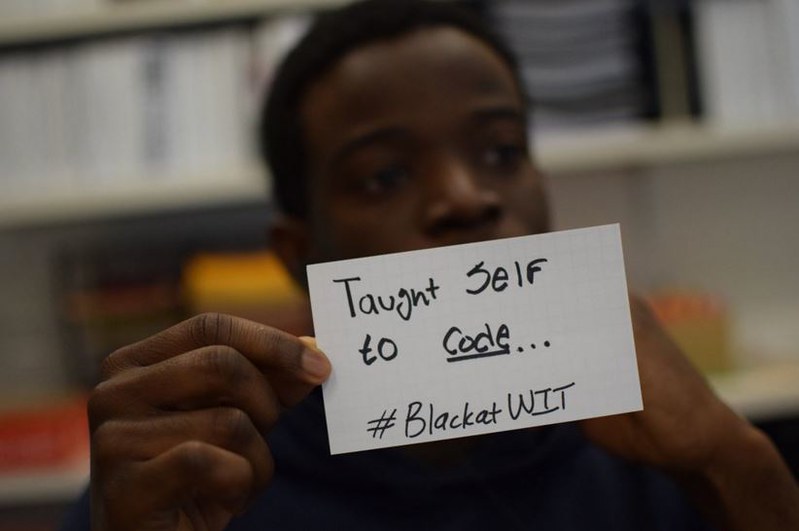