An Intersection of Art, Business, and Technology

“It’s the biggest show that we’ve ever had here at the Midway,” said Nick Ortolino, associate professor of industrial design at Wentworth and resident artist at Midway Artist Studios. “And several people have come up to say that it’s the best show, too.”

Ortolino speaks of a recent showcase of work by students in Wentworth’s Department of Industrial Design, a month-long exhibit that wrapped at the end of July. Midway, located in Boston’s Fort Point neighborhood, serves as a haven for artists looking to live and work in the city at an affordable rate. For Wentworth, the exhibit represented a highly visible location to promote student work.

Open to the public, the exhibit featured several examples of work completed in Wentworth industrial design classes. Bicycles of varying colors and sizes—courtesy of the Bike Studio class taught by Professor Chris Raia—lined several walls; Professor Bill Bancroft’s Furniture Studio contributed thought-provoking desks and stools, as well as innovative lighting fixtures; and Professor Trish Ng’s Footwear Studio was responsible for populating the gallery with shoes made from traditional materials including leather and cloth, as well as pieces derived from nails, wires, and recycled plastic bottles.

Robots vibrantly displayed in one corner served as another example of collaboration. As a project spearheaded by Wentworth Professor Simon Williamson, each piece was based on an activity at Boston Children’s Museum in which kids were asked to draw their interpretations of a robot. Wentworth students viewed the drawings and reproduced the renderings using 3D printers on campus as part of the Kid Bots class.

Sector Vector, an innovative physics board game created by Wentworth students and faculty (Derek Cascio, James O’Brien, and Greg Sirokman), was also on display at Midway.

“We had a reception on July 21 and the space was packed,” said Ortolino. “In addition to Wentworth students, we saw many alumni, as well as city dignitaries and members of the general public. We’re very proud of the attention it has received.”

Ortolino has been a resident of the Midway since 2005, serving a vital role in the 2013 bid and subsequent sale in May 2014 that transferred building ownership from Keen Development to Midway residents. Ortolino served then as president of the tenants’ board, working with city officials, including Mayor Walsh, to help finalize the deal. Today, five connected buildings house 89 apartments (with 36 designated as affordable housing) on the top five floors, with the ground level serving as commercial space.

“The majority of residents remained here after ownership changed hands. And today we have a thriving collection of artists, all with diverse backgrounds working in varied mediums,” he said. “There’s nothing else like this in the Boston area. Midway is a lifeboat for artists.”

Ortolino says that the Department of Industrial Design wanted to do something public-facing for its Class of 2016 projects and he immediately thought of the Midway. “I think it’s been a win for the Midway, a win for Wentworth, and a win for our students.”

“To have our work publicly displayed in Boston while still in school has allowed us to start conversations with other professionals in the city, a huge bonus when trying to find a job in the area,” said John Erickson, BIND ’16.

Chris Wain, who works in one of the building’s rented office spaces, marveled at the bicycles on display while Ortolino provided a tour of the space. “This is the best show I’ve seen at the Midway,” he said. “I’ve seen several people walking around with their mouths open as they view the pieces.”

For Ortolino, who curated the exhibit, the pieces are the end result of both imagination and hard work contributed by Wentworth students and faculty. Ortolino also praised the contributions of Carly Hagins, Jac Van Loon, Joe Stauss, and Traci Disalvatore to make the show and opening reception so successful.

“Design and design thinking extends across many disciplines,” said Ortolino. “It intersects art, business, and technology. The scope of our students’ creativity still amazes me.” 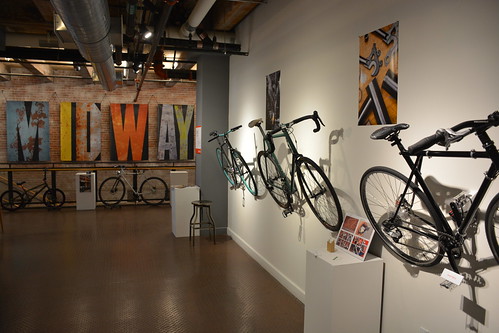 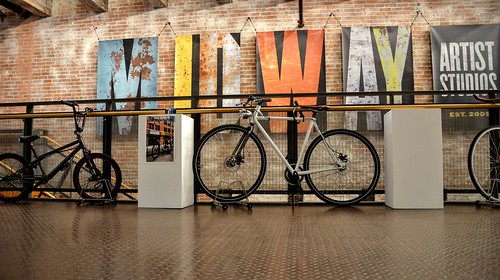 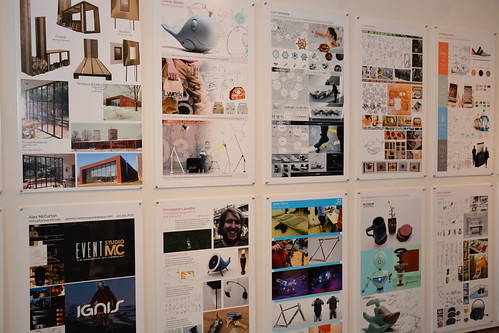 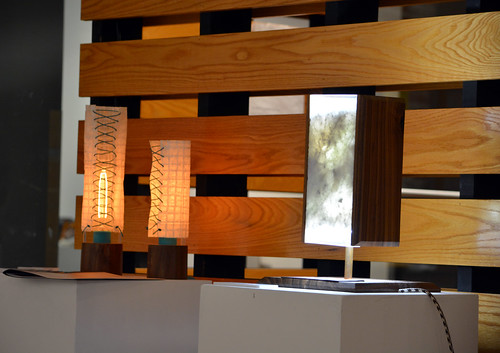 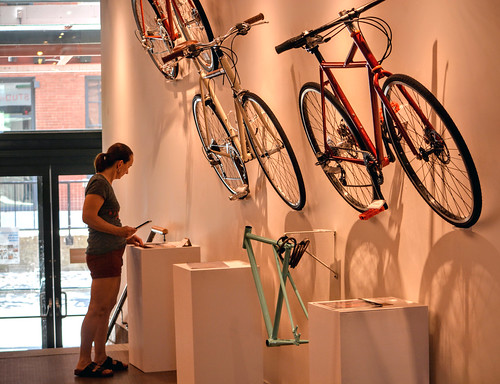 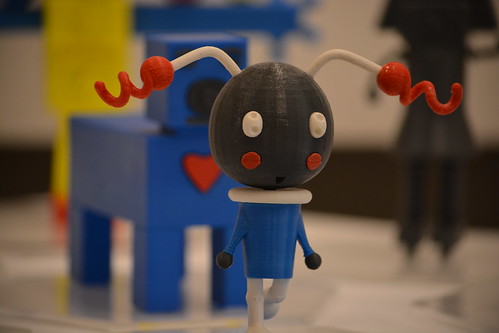